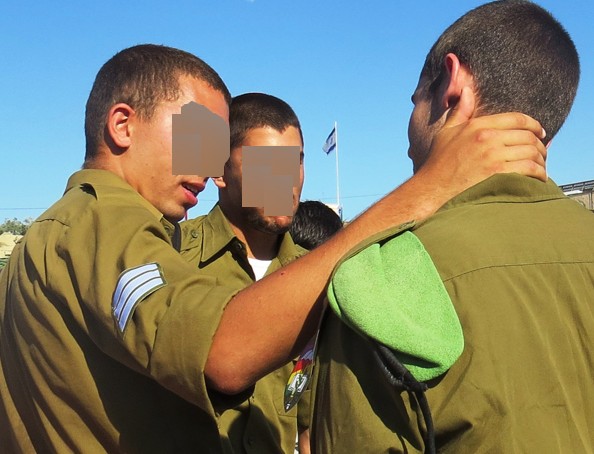 I was at a military ceremony recently. I don’t have a son in active duty…that will come too soon but it isn’t here yet. But my daughter-in-law’s cousin, who is actually more of a brother than a cousin, just finished the Commanders’ Course and our family joined in the celebration.

B.’s parents live in the States; he is considered a lone soldier, though I wonder how many lone soldiers have nearly as many people who love and care about them as B. does. He’s got a family south of Jerusalem, another smack in the middle near Modiin, he’s got his cousin, and he has us.

I took my fancy-shmancy camera – the one I got for my trip to Europe and with that, we took pictures. I want to post two of them here – none of B. – that is not my choice to do because he isn’t my son…which makes me wonder how I dared to post Chaim and Yaakov’s pictures…okay, I won’t go there. 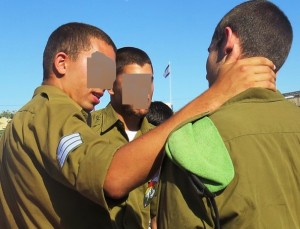 Anyway, I took this picture (yes, I have deliberately and hopefully efficiently) wiped out the faces of two of the soldiers. What I want you to see is the position of their bodies.

The young man on the left is a commander – as you can see by the three bars on his arm.

The young man on the right has just been promoted to a commander, having finished an intensive course.

What touches me is the arm – you’re one of mine, it says, don’t forget it. Wherever you go in this army, I’ll be with you.

I’ll tell you a secret that you might not believe. I’ll bet though, that you could ask the highest general in Israel, and he’d agree. This is the strength of the Israeli army – it’s all there in that arm. It isn’t the weapons, the tanks, the planes…it’s all there.

We are brothers, says that commander to his soldier. Soon, you’ll have your soldiers, but you’ll always be mine…we are and will always be – brothers in arms.

May God bless B. as he begins the latest phase of his army service. I know that he will do an amazing job…and as always, please God, bless our sons and daughters. Watch over them, as they watch over Israel.