Elie came to Israel on an American passport at just over 6 years old. Cute little kid, he was. A year later, he used the same American passport to go with the family to visit his grandparents, who were ailing. He was too young to go to the funerals and so only returned about 2 years later for his uncle’s wedding. That was about 14 years ago. It was the last time Elie was there. Another time, I’ll write of the culture shock he is about to experience, the things he will see and do. For now, it is about the process of getting there.

As I’ve written a few times here, our passports all expired – Israeli and American. Elie is marrying a wonderful young lady who moved to Israel almost 2 years ago…from America. She travels to visit her family there and then returns…she has a passport.

So, in the weeks before a planned visit to her family to introduce her future husband, Elie has to run around renewing his Israeli and American passports. As an Israeli citizen, he must exit the country as an Israeli. As an American, it is easier for him to enter the US as an American than to spend a long time applying for a VISA.

He went to the Israeli Interior Ministry – right here in our local mall. He gave them his expired passport, some photos and his identity card, and paid 250 NIS (about $70). It will be ready in a few days.

The United States formally recognizes Jerusalem as the capital of Israel. Each presidential hopeful flirts with the American Jewish community – it is happening already. This one promises if elected, his first visit will be to Israel (wonderful, more traffic); another offers other promises. Obama, like every Democrat before him, promised to move the US Embassy from Tel Aviv to Jerusalem.

I am not an expert on US diplomacy; though I’m pretty good at recognizing lies and hypocrisy. I don’t know how many US Embassies are located in places other than the capital of a country, but year after year, politician after politician promises they will finally move the embassy to Jerusalem…and then they sign an extension leaving it in Tel Aviv.

So, to get an American passport, Elie had to travel to Tel Aviv. That took him a bit over an hour. He carried with him his birth certificate (from NJ), his social security card, all his Israeli identity cards including his army ID and “combat soldier ID”, passport pictures, several hundred shekels (the cost to renew was $130; the fine for not renewing was waived because it expired before he turned 18), and pictures.

This is where it gets interesting. The document also states that the applicant must give “a series of photos showing age progression from the time of your last passport through today.” We began scrambling to find pictures, pulling them from albums, from piles of pictures waiting to be put in albums, sorting through digital pictures. Elie had the passport picture – that covers today. He had his Israeli driver’s license and ID – that covers from the time he was 17 until today. He left America at age 6. 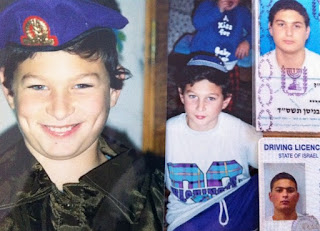 He told me about the security in the place – how they asked him if he had anything electronic on him. He wasn’t allowed to take his phone inside either. Both had to be left across the street at a shop that has a series of lockers. You pay $15 and you put all your stuff inside there and go back to the Embassy.

There was a woman there who spoke no Hebrew; one that spoke Hebrew, but almost no English, and finally one that spoke both languages. “Which language did you speak?” I asked him. 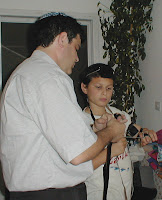 He told me there were American flags everywhere inside. I think it was a bit of a culture shock for him. Elie came back home and we began looking for more pictures. Can you tell the story of a boy in pictures?

There he is with his father, learning for the first time how to put on tefillin. Something he does every weekday morning. He looks so serious there as he watches his father wrap the strap around his fingers. It is a binding – a binding of love between Elie and God that should last him all his life. My husband looks so young there.

This was our first son that we brought to bar mitzvah – the age where he becomes responsible for the paths he will choose. I look at the boy, and at the man that he has become, and I’m proud.

Yes, there are things I would change – he still has a temper and his room is still a mess but he has conquered mountains and learned more than I will ever know. In this picture, he is starting his life as a mitzvah-observant Jew. Yes, he had said the morning, afternoon, and evening prayers before this picture was taken, long before, but this was the actual day (the night before, actually, but still counts as the day); just as now he is starting a new life as a partner to someone else.

No, I don’t expect the embassy to do more than look at the face and trace this connection they think they need from the birth certificate and other pictures to today. But I look, I see. The rest of the pictures are digital and stored on computers. The actual dates of when the pictures were taken have been lost as files are copied from one computer to the next.

I am guessing based on the ages of my youngest daughter. It’s curious how often she is with Elie. Look how he holds her hands, how she sits there calmly. 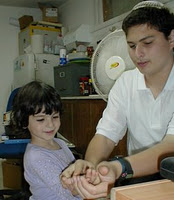 In this one, she looks about 3 years old; that would make Elie around 16. He has changed, matured and still he holds her hands as he shows her something. I don’t know what he was teaching her but her face is filled with wonder. This is the boy I wanted him to be. There’s an innocence around him – or is it only me that sees it? This is before…before he learned things I never wanted him to know. The things I see in his face are no longer there in him.

His dreams of the future are there, but they are tempered with knowledge and maturity. Is it only me that sees it? 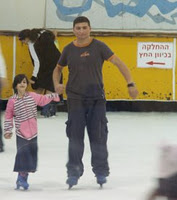 In the next one, Aliza is six years old; Elie is 19. He is months away from going to the army. We went ice skating up north (in one of the two real ice skating rings that I know about in the whole country). Elie held her, kept her from falling. Around and around they went – always he gripped her hand.

His face is too small in this picture – the embassy can see the shape. I don’t know what camera I used, but the picture is too low in quality to let me see more than the body language as they stopped on the ice to pose for me.

The first time he came home from the army wearing a uniform, I took a picture of him. He was so proud to return to us, happy with what the army intended for him. He still looks so young in this picture. It was taken when he was 19, but already closer to 20. He had barely walked into the house for that first time home before I grabbed the camera and insisted we take pictures. 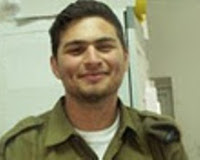 The beret on his right shoulder marks him as a new soldier – he has not yet been given the turquoise beret of the artillery division because he is only days into his basic training. He’s happy here – happy to be home and free for a few days.

This was the end of the pictures Elie felt he needed to give the embassy to qualify for the “series of photos.”

“They have my army ID photo and the cartis lochem photo.” (A special card is issued to combat soldiers – this is the picture he gave them as well). He didn’t think they needed the picture I have used on the blog – the one to the right here that I have loved for years. The job is done. Elie believes with these pictures, the embassy will agree that he is who he says he is and they’ll give him the passport.

For me, it’s been a nice journey back, seeing the boy – the little boy with the beautiful blue eyes….laughing as he is dressed in his costume for the Purim holiday. It’s funny that the picture I found easily was the one where he had dressed up as a soldier – he was a clown once, a policeman, some animal…I think, several cartoon characters…now…now he’s Elie again, an occasional soldier, a frequent medic, always a son and within a few  months, always a husband.

Tonight they went to see another place and a band. It’s the first time I haven’t gone along with them – we already picked out the place they wanted, though they thought to go and see one more place tonight. Wedding plans are moving forward – the hall, the band, the photographer – and today, the passports.