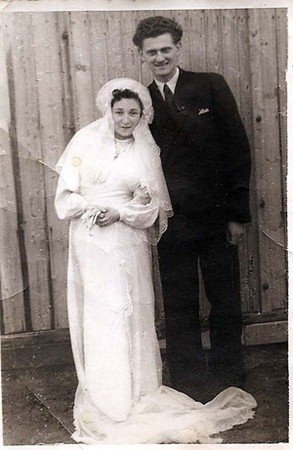 Nothing in the story that follows took place in Israel and yet everything about it is Israel. We are a country; but we are country made up of a people. Sometimes, the oceans that separate the people cause some to think that we are divided, but in so many ways, we are not. This is the amazing story of a wedding gown…but more, it is the story not just of survival, but of triumph. It was this same determination that helped build and sustain our country in the early years, and even in the most recent war in Gaza. So, though this is not Israel, this is most definitely Israel.

I don’t know who wrote this story originally, but I hope they don’t mind my copying it here to share with everyone…it is truly an amazing story, about an amazing woman, part of an amazing people.

Note: With gratitude! The author of this original piece contacted me. All credit for this wonderful story goes to: Helen Zegerman Schwimmer and here is a link to the original story! Wonderful, beautiful, inspiring!

The Wedding Gown That Made History

Lilly Friedman doesn’t remember the last name of the woman who designed and sewed the wedding gown she wore when she walked down the aisle over 60 years ago. But the grandmother of seven does recall that when she first told her fiancé Ludwig that she had always dreamed of being married in a white gown he realized he had his work cut out for him.
For the tall, lanky 21-year-old who had survived hunger, disease and torture this was a different kind of challenge.

How was he ever going to find such a dress in the Bergen Belsen Displaced Person’s camp where they felt grateful for the clothes on their backs? Fate would intervene in the guise of a former German pilot who walked into the food distribution center where Ludwig worked, eager to make a trade for his worthless parachute. In exchange for two pounds of coffee beans and a couple of packs of cigarettes Lilly would have her wedding gown.

For two weeks Miriam the seamstress worked under the curious eyes of her fellow DPs, carefully fashioning the six parachute panels into a simple, long sleeved gown with a rolled collar and a fitted waist that tied in the back with a bow. When the dress was completed she sewed the leftover material into a matching shirt for the groom.

A white wedding gown may have seemed like a frivolous request in the surreal environment of the camps, but for Lilly the dress symbolized the innocent, normal life she and her family had once led before the world descended into madness. Lilly and her siblings were raised in a Torah observant home in the small town of Zarica, Czechoslovakia where her father was a melamed, respected and well liked by the young yeshiva students he taught in nearby Irsheva.

He and his two sons were marked for extermination immediately upon arriving at Auschwitz. For Lilly and her sisters it was only their first stop on their long journey of persecution, which included Plashof, Neustadt, Gross Rosen and finally Bergen Belsen.

Four hundred people marched 15 miles in the snow to the town of Celle on January 27, 1946 to attend Lilly and Ludwig’s wedding. The town synagogue, damaged and desecrated, had been lovingly renovated by the DPs with the meager materials available to them. When a Sefer Torah arrived from England they converted an old kitchen cabinet into a makeshift Aron Kodesh.

“My sisters and I lost everything – our parents, our two brothers, our homes. The most important thing was to build a new home.” Six months later, Lilly’s sister Ilona wore the dress when she married Max Traeger. After that came Cousin Rosie. How many brides wore Lilly’s dress? “I stopped counting after 17.”

With the camps experiencing the highest marriage rate in the world, Lilly’s gown was in great demand. In 1948 when President Harry Truman finally permitted the 100,000 Jews who had been languishing in DP camps since the end of the war to emigrate, the gown accompanied Lilly across the ocean to America. Unable to part with her dress, it lay at the bottom of her bedroom closet for the next 50 years, “not even good enough for a garage sale. I was happy when it found such a good home.”

Home was the U.S. Holocaust Memorial Museum in Washington, D.C. When Lily’s niece, a volunteer, told museum officials about her aunt’s dress, they immediately recognized its historical significance and displayed the gown in a specially designed showcase, guaranteed to preserve it for 500 years. But Lilly Friedman’s dress had one more journey to make. 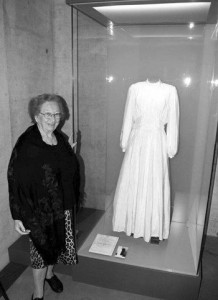 Bergen Belsen, the museum, opened its doors on October 28, 2007. The German government invited Lilly and her sisters to be their guests for the grand opening. They initially declined, but finally traveled to Hanover the following year with their children, their grandchildren and extended families to view the extraordinary exhibit created for the wedding dress made from a parachute.

(Picture: Lilly Friedman and her parachute dress on display in the Bergen Belsen Museum)

Lilly’s family, who were all familiar with the stories about the wedding in Celle, were eager to visit the synagogue. They found the building had been completely renovated and modernized. But when they pulled aside the handsome curtain they were astounded to find that the Aron Kodesh, made from a kitchen cabinet, had remained untouched as a testament to the profound faith of the survivors. As Lilly stood on the bimah once again she beckoned to her granddaughter, Jackie, to stand beside her where she was once a kallah. “It was an emotional trip. We cried a lot.”

Two weeks later, the woman who had once stood trembling before the selective eyes of the infamous Dr. Josef Mengele returned home and witnessed the marriage of her granddaughter. The three Lax sisters – Lilly, Ilona and Eva, who together survived Auschwitz, a forced labor camp, a death march and Bergen Belsen – have remained close and today live within walking distance of each other in Brooklyn. As mere teenagers, they managed to outwit and outlive a monstrous killing machine, then went on to marry, have children, grandchildren and great-grandchildren and were ultimately honored by the country that had earmarked them for extinction.

As young brides, they had stood underneath the chuppah and recited the blessings that their ancestors had been saying for thousands of years. In doing so, they chose to honor the legacy of those who had perished by choosing life.