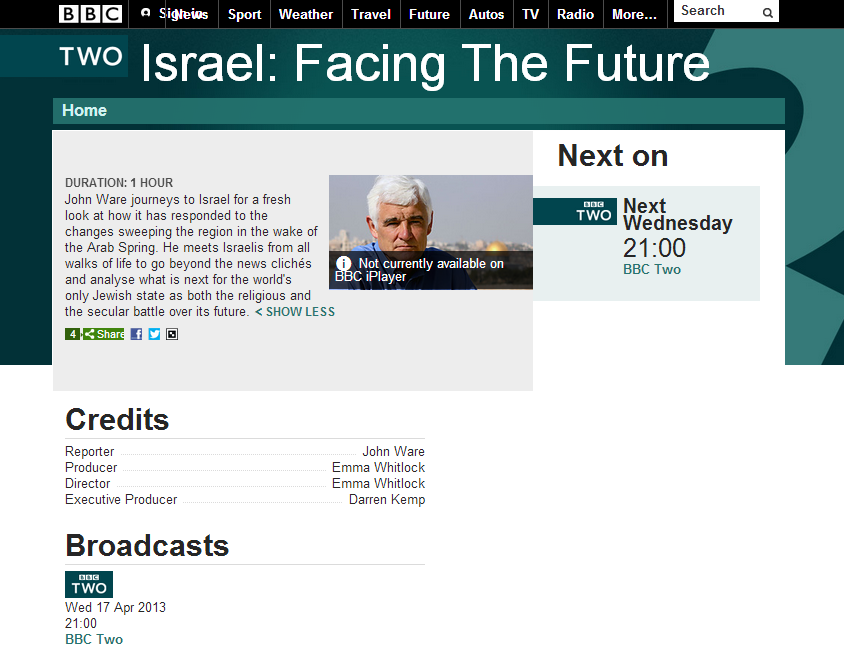 Now, if only I had a television…do I want to watch? I don’t know. 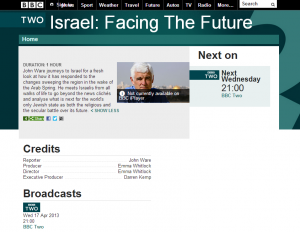 I guess I hope they don’t make me look like a fool.

I guess I hope they don’t make my city look like some occupied fortress stealing bread from the mouths of hungry, half-naked Palestinian children.

It’s a done deal, now – no more time to hope they showed my city as I see it, my country as the one I love. Either they did or they didn’t. It’s their chance, not mine anymore. I had my chance here, now they have theirs.

Why did I agree to do this? What made me think I could speak for Israel and do it right? What words shouldn’t I have said? What phrase could be cut and misinterpreted, twisted to be ugly, racist, uncompromising? Why did I believe them when they said they wanted to show the Israel so few really see?

I hope I don’t look fat. I hope I don’t look ugly. I hope my hair wasn’t blowing in my face. I hope my hair was blowing in my face. I hope the camera doesn’t make me look even another 10 pounds over the ones I need to lose. I’ve had five children, people – but yeah, that’s an excuse. Exercise – why didn’t I exercise more before I agreed to go on international television? Maybe I shouldn’t have worn…what was I wearing…who remembers?

I don’t hate all Arabs. I do want peace. No…I really don’t believe there will be – but that sounds like a negative thing – does it come across? Did they make it come across? Does it look silly and staged to have walked in the supermarket? Did they show the barren hills – that was so important – did they include the image so people can see the truth of where we live? That no one, no Arabs, no village was destroyed to build the beautiful city in which I live?

Will they understand that even someone who doesn’t believe in peace still wants it terribly? Why did I choose the name “A Soldier’s Mother”? It sounds like I want violence. I don’t. I just want…

Okay…should I watch BBC tonight…or should I just let others tell me that I made a mistake. That I shouldn’t have been so arrogant to think that I could find un-twistable words. Arrogant…arrogant…arrogant. So many others have fallen before the BBC reporters, their words taken out of context, ignored, twisted. Why…why did I believe I could talk, that I should talk? Why did I do it?

I’m just human. I am not an international, famous person. I am me. I met them, I opened my heart, my city, my life. I gave them my words, my story. I want to believe but right now I don’t. In…how many hours? It’s almost 10:00 a.m. in Israel – is England ahead of us or behind us…how many hours till this shows? Should I watch it?

Okay – enough. I could spend hours pouring out my concerns about this. I hope…I hope…I hope.

I hope tonight comes quickly and no one is watching…unless it’s good, in which case, I hope everyone is watching. I hope my friends and neighbors don’t think I was an idiot. I hope I don’t look stupid.

I hope…tonight comes and goes very quickly and I can go back to my words being mine. Yes, from now on, I think I’ll let others speak for Israel and I’ll stick to here.

Please John Ware, please BBC…let tonight do what you said you wanted – let it show the side of Israel I have always loved; a land unlike any other. Let people see that no one was hurt by the creation of my city; that both Arabs and Jews benefit from Maale Adumim – and Israel, being where it is.

Let them see we are all human beings, with children and lives.