Besides my other post on our vacation day, there were two other things that happened that I wanted to write about. The first was, in many ways, yet another reflection of Israel. The second was a reflection of my sons (and daughter-in-law). 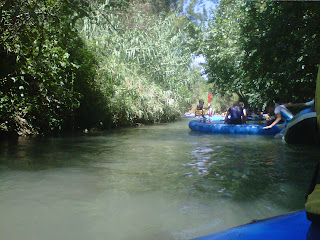 As we were floating down the Jordan, Davidi, Aliza and I saw a cluster of people on the shore. There were at least two paramedics and one young woman looked like she’d been hurt. I couldn’t see any injuries, but I saw how people had clustered around her. I knew that a moment later, Elie and Lauren would see and maneuver over to check if assistance was needed. Even here on the river, on vacation, it is their way. They automatically run to help others. 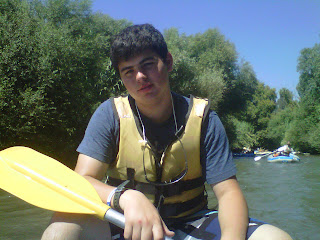 Davidi volunteers regularly for the local ambulance squad, but he has not yet taken the advanced training courses that Elie and Lauren have and so there really was nothing he could have added. We kept going and a short while later, grounded ourselves to relax and wait for the second half of our group. We entered the water together and would exit it later – and besides, we were on vacation so what’s the point of rushing? 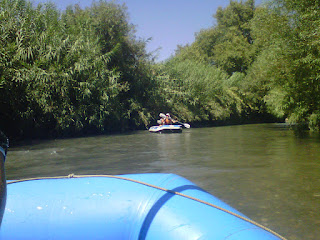 When we caught up, I asked if they’d stopped – and sure enough, they had. One paramedic recognized Elie – here, hours away from where we live. Just a “you look familiar” comment that had them trying to play Israeli geography and figure out where and when their paths may have crossed. As for the injured girl – Lauren got the rest of the story.

The raft flipped over and the girls were thrown into the water. One girl was injured enough that she needed to be evacuated – she was the sister of the girl I saw sitting on the side, the center of the cluster of concerned people.

No, she wasn’t physically hurt…but…she had been in a terrorist attack in Jerusalem and this sudden event brought back the terror of that day. The impact, being thrown, her sister being hurt. It was too much for her to deal with; all the horror came back. What was incredible was that people came to treat  here and deal with her shock and fright – there on the river, people surrounded her, talked to her, held her hand and brought her as much comfort as they could.

What lingers in my mind is the thought that these deep scars remain – always. So that suddenly, far from where it happened, it all came back – on such a beautiful day when children shouldn’t have to remember the horrors of an explosion, blood, and death.