I don’t know how many of you are familiar with Twitter (www.twitter.com). It’s an amazing concept. With just 140 characters, you pass your message to countless others who have chosen to follow you, while you receive similar messages (tweets) from those you follow.

Within a given period (I think it is 24 hours), Twitter has a mechanism to count the number of times people are tweeting about a specific subject (when the people include a hashtag (#) before the word.

The protesters in Iran have understood and mastered the concept and so began a hashtag called #iranelection, which quickly rose to the top of the trends. Another, a television show #Jon and Kate has also risen to the top. While CNN and BBC and other mainstream media were relatively low key on the rising tide of protests in Iran, the Twitter world took fire. The Iranian government silenced, arrested, or expelled foreign journalists. They managed to block much of the Internet and Facebook connectivity, and yet, somehow, they failed to silence Twitter and its simple 140 character message bursts.

People, in sympathy and support of the Iranian people, began changing their avatars (those small little pictures people use to identify themselves), to green. Many Israeli tweeters did the same – even though Mousavi, the alternative to the current president Mahmoud Ahmadinejad, is hardly a friend of Israel. Mousavi helped found Hezbollah, supported holding the US hostages in Iran, and is most happy to continue developing nuclear weapons to be used against Israel. For Israel, is particularly optimal, but the Iranian people have a right to elect their own leader and if they do that, that leader should be the one to serve.

But out of the growing green images on Twitter, an idea was formed. One person (@carolw) and I thought of an idea – in “honor” of Gilad’s 3rd anniversary in captivity, maybe we could get the Twitter world aware, maybe the media would take notice. We chose the hashtag #Gilad. Simple and clear, but filled with a wealth of yearning, anger, a demand for justice, and sympathy and pain for his family. 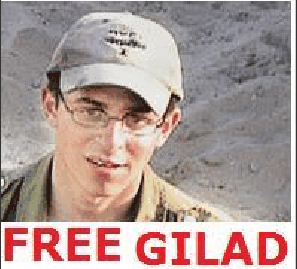 Carol and I began posting to our “followers” asking them to RT (re-tweet – or send on to their followers) and it took off, it really did. The message is being sent around the world. The target day is Thursday. We asked people to change their avatar for one day. To a picture of Gilad, and already, several people have done so (and it’s only Tuesday). And then I noticed something strange. On the #Gilad page (http://search.twitter.com/search?q=%23gilad), none of my messages appear. Instead, I see so many other posts referencing @ASoldiersMother, but nothing from me. It’s a problem I have seen before, but it never bothered me.

This is important – every post that includes the #Gilad hashtag is needed if we are to get Gilad to the top for that one day. There are other things we can do, but this is one.

So I wrote to Twitter and got a ridiculous response. “My name is Luke and I’m going to try to help you. I know you’re frustrated and I’m sorry for the general instructions, but I don’t want you to wait too long, so to help you as quickly and efficiently as possible, I’m going to first ask you to try to help your self. I’ve marked this as ‘solved’ for my own purposes. If this info doesn’t solve your issue, all you need to do is reply to this email and it will re-open the ticket.” And with that, Luke sent me a list of fix-it-yourself instructions that had nothing to do with my problem at all.

I wrote back, asking Luke to hurry. This is important. This is Gilad.

“I’m disappointed that the request was handled this way. It assumes that we didn’t do our research and read carefully the options for solving the problem ourselves. While this may be true of some of your users, others are technically savvy and the vast majority of the above list has nothing to do with the problem I mentioned to you. Nothing to do with changing my email, sending direct messages etc. I really feel your answer was, please excuse me for saying this, a polite “blow off” when I wrote on what I feel is an important matter.

With the problems in Iran, Twitter has blown away the normal media communications avenues and positioned itself in a fantastic place. Beyond the celebrity stuff, which hopefully no one takes seriously, Twitter has become an important and even life-saving tool for a country in desperate need of a communication line out.

I was hoping, am still hoping to do the same for a young man – he’s barely 22 years old and has been held captive since he was 19, when he was kidnapped by Hamas and dragged across the border from Israel to Gaza.

I want, for one day, to let people pay attention. It’s working – look at how #Gilad is building…and me – the one who started it…isn’t even listed. That’s pathetic and sad. I wrote needing your help…please, please find a way to solve this for me.

Thanks
Paula
A Soldier’s Mother (another one, not Gilad – mine is named Elie (www.israelisoldiersmother.blogspot.com)

Isn’t that silly? To write as if Gilad’s life were to depend on this? To worry so much that we won’t succeed? But what else can I do to help Gilad? Is there anything you and I can do? Probably not…but maybe on Thursday, if Gilad gets to the top – maybe BBC and CNN will write about it; maybe government leaders will take notice; maybe the Israeli government and others will say to Hamas – enough, even you have to be human for one day in three years. Let Gilad go home.

Will Luke care about Gilad? Stay tuned – and on Thursday, if you are on Twitter, no matter what you post, just add #Gilad – please.