The one thing we all knew going into this military action that has yet to be called a war, is that there would be soldiers who would fall in battle. We are not a country that worships death, nor do we believe it is preferable to life. We do not want our sons to be martyrs or heroes, only that they live long and healthy lives. And yet we have no choice but to give them the responsibility to protect our land, and in so doing, we know that sometimes, some will be asked to make the most horrible of sacrifices, the greatest of gifts to our land. 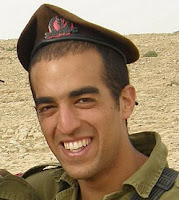 Staff-Sergeant Dvir Emanuelof, 22 of Givat Ze’ev died today and will be buried tonight. He was killed Sunday in a mortar attack during a morning clash with Hamas terrorists in the northern Gaza town of Jebalyah. We know how he died, when he died, but what we have yet to learn as a nation, is the nature of the boy we have lost. This is, in many ways, what sets Israel apart from much of the world.
Dvir will never be just a number. Tonight, as his family mourns and prepares for his funeral, our local media will seek out his friends and ask them to tell us about Dvir.
Articles will appear tomorrow in all the newspapers and on the websites. His teachers will come forward and talk of the kind of boy he was, the kind of student. Neighbors and friends and relatives will tell us what we can see just from the look on his face and the smile in his eyes. He was someone who loved life and was probably well loved.
We will immerse ourselves in the knowledge of his life before we let him go, and be forever saddened that we only had the chance to meet him in death. But what is also very Israeli is that while his parents may have lost a son, they have in the moment of his death, gained many more sons and daughters.
For the rest of their lives, Dvir’s unit will accompany them. They will visit them, invite them into their lives and become part of Dvir’s family. It is little consolation for what they have lost, but it will help.
Tonight, Dvir will be buried, the first to fall in a war that has no name, but one for which all of Israel stands. Friends called today to tell me of other boys from the neighborhood who are down there as well. As I did yesterday, today I spoke to other mothers of soldiers. We comfort each other and find no real comfort. I haven’t spoken to Elie all day. I have to leave it for him to call me. Tonight in my neighborhood, there is a prayer gathering for the soldiers and no doubt this is repeated all over Israel.
I’m torn about going. I can easily “escape” it by saying that I really don’t want to leave my two younger children home alone. My daughter hasn’t yet fallen asleep and for the last few days hasn’t been sleeping well at all. But I’m not sure I’m up to a communal prayer – my prayers lead me to tears too often when I want to appear to be strong and not worried. It isn’t that I lack faith, only that I am too scared at times to believe in automatic redemption.
Elie’s first commander, Or, promised me many months ago that artillery was the safest of the branches; the one that stays far behind. Critical for the war effort and respected nonetheless, it is a mother’s dream compared to those who enter. Dvir entered Gaza because it was what he was trained to do and because he knew it was the right thing. Tonight, his family buries him, the first to fall.
I want to pray that he will be the last one too; that no others will fall. I do pray that even though I know it is not likely; that our enemies seek our destruction, amazingly enough even at the cost of their own. It is hard to face an enemy that seeks death, that worships it, that elevates it to the highest of honors.
There is no honor in death, though there is honor in how Dvir died. May the memory of Dvir Emanuelof be blessed and long remembered and may his family be comforted among the mourners of Zion and Jerusalem and may they know no more sorrow.

13 Comments on The First to Fall