Today was the first day of school for most Israeli kids – for David, it was the second day. Tomorrow, there will be a test in his school to determine the math levels at which they will study this year. There are three options – level 3, level 4, and level 5. If you want to study for a degree after army and college, you need at least level 4.

David has always been a math whiz. He understood fractions and negative numbers when he was in second grade. The elementary school finally acknowledged that he was gifted in math (that took me a few weeks and arranged for him to leave his 2nd grade class and go sit in the 4th grade class to learn there (that took another few weeks). Finally, he was learning and challenged and his behavior got better. He understood that to earn the privilege of being with the 4th graders, he had to behave…and he did.

The next year, when he was in 3rd grade, the schedules would not mesh and so he learned 4th grade math again (better than 3rd grade, we reasoned unhappily). Finally, in 4th grade when I asked if they were going to have him do 4th grade a THIRD time, they put him into a special program – for advanced 5th graders. And there he thrived. The kid is brilliant. The kid is also lazy!

David called me last night with a list of things he forgot…like a towel, his toothbrush…never mind that it was on the list we made together. He called me again in the afternoon.Today, his teacher told him that he could not go into the level 5 math because he chose to skip a test that he should have taken at the beginning of the summer. We agreed I would call his teacher. Turns out, I was calling the principal. After a long discussion, he  agreed to talk to David tomorrow in school and see if the math teacher would allow David more time and then a re-test.

The principal felt David deserved some punishment and suggested knocking an automatic 5 points off his yearly grade. I thought that was not the right form of punishment. The principal was concerned about rewarding David and also about causing the math teacher more work. I suggested giving David additional assignments and said, “you don’t even have to look at them other than to see he did them. Just make him do it.” I was all for a punishment, but let it be a punishment that is good for the child, not one that hurts him. Finally, it seems, the principal agreed with me.

I told Elie about my conversation and once again thought how much I can learn from my children and from their experiences. Elie told me about how he learned what a just punishment would be via the actions of a commanding officer. I’ve heard so many stories about this young officer and each time am amazed at the wisdom of our young.

One of Elie’s soldiers was upset about something – I have no idea what. In anger, the soldier turned and spat. Both Elie and the commanding officer saw this action; both were surprised not only at the lack of discipline and the action, but what they believed to have been the target – the flag of Israel. 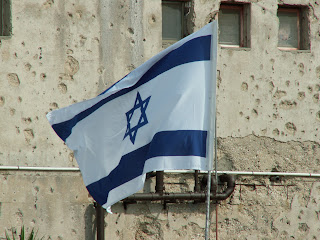 Whether by intent or by accident, the young soldier spitting in the direction of the Israeli flag shocked all who saw it, including Elie’s commander, K. For this action, K. ordered the soldier to spend a month or so gathering information from many people, including Holocaust survivors – about what the flag meant to them, what it means to all of us and, by extension, what Israel means to them.

You can imagine the emotions this young man must have encountered and experienced as people told him what the flag means to them, to see the Jewish star of David flying so proud in our land.

It is the symbol of a people coming home; it is a symbol of finally being safe in a land that was always ours. Once intended as a badge of shame by the Nazis, it is ours in pride and honor.

Somewhere during the “punishment” the task became a privilege. There were even times K. let the soldier leave base earlier than the others in order to give him time to complete the assignment and when he was done, the soldier stood before the entire group and gave a moving and meaningful presentation on the flag. He explained what he had done to deserve the “punishment” and explained what the flag meant to him and to so many others.

That’s what a punishment should be – a lesson in and of itself. This was why Elie told me this story again today and why I write it here. Elie said the school should “punish” David with a lesson that will enrich him and finally concluded with, “that’s how I learned how to give punishments.”

It’s a lesson we all have to learn – from the wisdom of an army officer given to my son and now to me. We must punish not in anger, but in justice. Not to hurt, but to teach. That soldier is unlikely to ever spit at a flag again because through his punishment, he learned and enriched himself.

Stay tuned to see if David gets some punishment. For now, having heard about the conversation I had with his principal, he is motivated to prove that he should be allowed to enter the higher level. I hope he will be motivated to do it – and once there, I hope he will show the school what he is capable of doing.

2 Comments on Learning to Punish