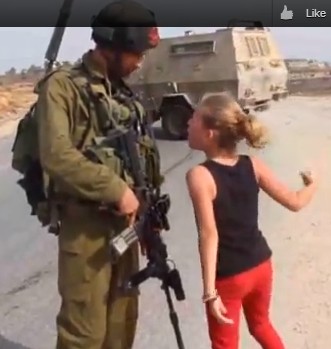 I don’t know what I would do other than be deeply ashamed. Certainly, these children are further examples of the manipulation of their society; mere objects to be videotaped as they play their role.

I am proud of our soldiers in this video – deeply proud that they were able to smile. I loved their smiles; I loved their laughing. These children represent so much of what is wrong with Palestinians society. 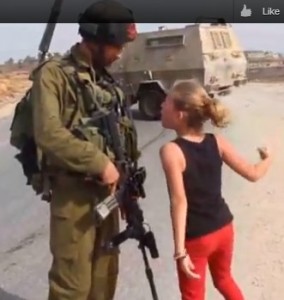 And through it all, they realize that this is a show put on for the cameras. Obviously, the IDF felt as I did – they posted this video – first put on YouTube (http://www.youtube.com/user/sam4palestine?feature=watch) to show, as I do – the arrogance, the hatred, the violence…
The original posters were able to remove it (as I assume they will remove it from my blog, if they find it here). So, if below, you see a message that the video has been removed, rather than the video, please use the link in the previous paragraph. Look at the children…
I think they are close to my youngest daughter’s age. My daughter is all that is grace. Gentle, sweet, loving, kind. Even in anger, she would never approach another and scream as these young girls do. The girl in the video is being raised in a different culture – one in which her father would kill her…literally…if she were to “flirt” with a boy or even be seen talking to one – and yet look how close she moves to the soldiers. And amazingly enough, the Arabs are so proud of this behavior, they flaunt it, they post it, they share it. If this were my child, I would be so deeply ashamed. 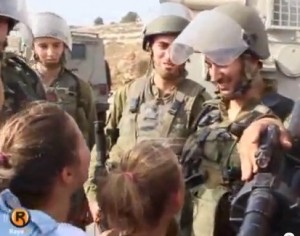 But these children are being raised in hatred and hatred is what they will know. And the soldiers – they smile because they realize the absurdity of it all. They remain, always, in control – enough not to get angry at the provocation, at the abuse of children that is in the nature of using children to fight your battles.
If this were my child….but of course, it could never be. I have done my best to raise them in honor, in respect, in life, in love. These soldiers will finish their week and go home to their families, to their mothers. They might even show them the YouTube videos that have made them “famous.” And, if they were mine, I would kiss the tops of their heads and tell them, “you did good.” And I would bake them brownies and send them back to the army next week and tell them to be careful…even from little girls.
Today, in the midst of a screaming Arab mob throwing rocks…an Arab stabbed a soldier; a bomb went off near Gaza, wounding three soldiers. The most precious response these soldiers could give these children was the smile and laughter of a nation that does not fear.

5 Comments on If This Were MY Child….