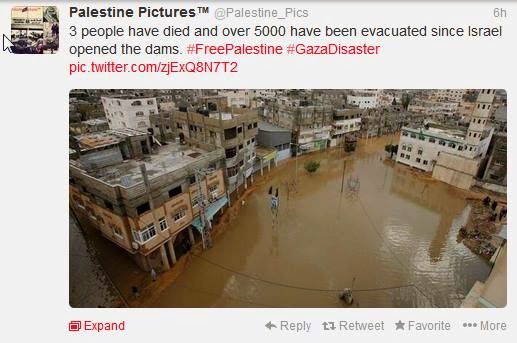 I keep thinking that someone will look at this and get a real laugh. Oh, not for the tragedy of three people dying and 5,000 being evacuated…but about blaming Israel for the worst storm of the century and saying we opened the dams.
We didn’t. We really didn’t. And we didn’t – because the damn dams, damn well don’t exist. That’s right…there are no dams that we dammed up…in fact, if I’m not mistake, there are no dams at all between Israel and Gaza…and, if there are any rivers that flow into Gaza, well, by the time they get anywhere near Gaza, they’re more of a tiny, tiny, tiny stream than anything that anyone would ever call a river.
Excuse the vulgarity, but his point remains…there’s not a lot of water here unless it falls suddenly from the skies and while we appreciate the Gazans recognizing that Israel has a special connection with God, I really don’t think they can blame us for this one.
Of course, if they spent a fraction of the money they receive from the United Nations and European Union on…can you imagine…infrastructure, well, Gaza still would have flooded – we got a lot of rain and snow, folks, but it would have been better.
On the flip side, we could make them an offer – we sent military vehicles into Jerusalem to save people…we could do the same in Gaza and really clean the place up.
By the way – in their desperation, Gaza asked the Palestinian Authority to send them fuel. The answer from Ramallah was that you have an open bill and when you pay that, we’ll send more, and so it was Israel that the UN turned to – and Israel that sent in truckloads of fuel to help the Gazans heat their homes during the latest storm.
And, from what I understand, they thanked us by launching a couple of rockets at us.
I wish, just once, if they were going to accuse us of something, that it was at least halfway credible (hat tip to George on this one).
Those damn dams don’t exist. 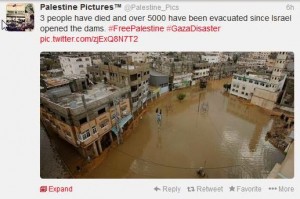 3 Comments on Gaza and Their Dam Lies