A friend posted a commercial, supposedly rated number one in Europe. It shows a father and son shopping. The boy wants a bag of treats and while the father isn’t looking, he slips it into the shopping cart. Already at this moment, there is something wrong. You can see it in the eyes of the child – anger, testing, daring 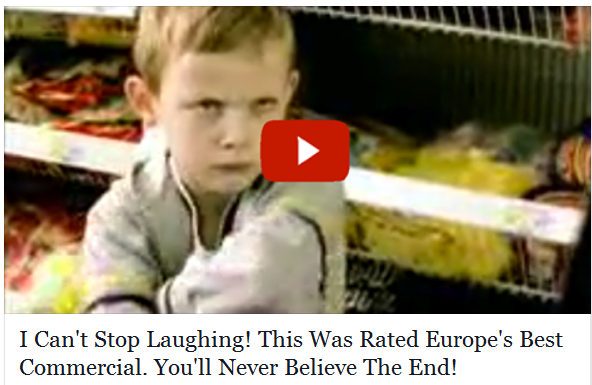 the father to react.

The father puts the treat back on the shelf; the boy puts it in the cart again. This has happened to most parents. But soon comes the difference between what should have been and what the morale of the commercial is for its creators.

Without saying a word to the son, the father once again returns the treat to the store shelves. At this point, the child becomes enraged and begins the “mother of all tantrums.” He screams, throws things off the shelves and finally lays on the floor screaming and kicking. The only “word” the father ever says in the commercial is “sh!!!!” as he tries to stop his son from screaming. 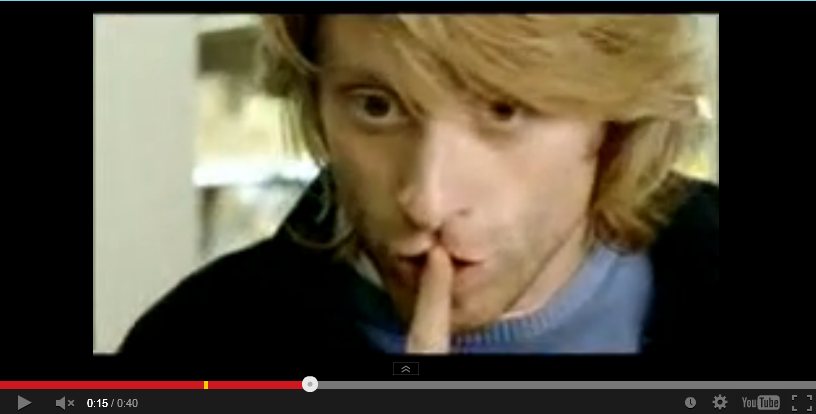 As the father looks in despair and confusion at his son, the words, “Use Condoms” comes across the screen. And in this one commercial, much of what is wrong with European society came into my mind.

Is the answer really to not have children, to wish they had never been born? Or is the answer to invest the time to properly raise them, to communicate, to explain?

I have been blessed…yes…blessed…with five amazing children and truly believe my country and the world are better for their having been born. The oldest is 28 years old and in the 28 plus years since I gave birth to her, I have never, ever, never, not once thought it would have been better had any of my children not been given to me.

In thinking (okay, over-thinking) about this commercial, I remembered an incident that happened to me in New Jersey exactly 24 years ago. My third child was a few weeks old (he just turned 24 a few weeks ago). I was going to pick up a replacement stroller and I had my infant in a sling-like carrier and was walking my two older ones by hand so that I could leave the store with one stroller. My second child started to cry – I don’t remember why (maybe his shoe lace was untied?). I remember bending over to talk to him to see what was wrong, and then the baby started to cry.

It was an overwhelming feeling – to have your arms stretched to either side holding a child in each arm; trying to console one child while your baby starts to cry. You didn’t want to let go of either child and yet you need a third hand to console the baby. I remember having a diaper bag slung over my shoulder and with the baby and all, I could barely move.

In Israel, people would have come to help…in America, as a woman was passing me, she said, “if you can’t handle them, you shouldn’t have had them.”

My very first thought, as I looked at her, wasn’t the most reasonable and yet it was…”that’s America.” I felt more pity for her than the contempt she had earned by her callous remark.

And, if that wasn’t enough, that incident had come only days after I met up with a high school friend who, after hearing that I had just given birth to my third child in five years, responded with, “jeez, don’t you guys ever sleep?”

At the time, I had thought how little he understood the blessing of a child and later how little that woman outside the store understood. Now, seeing this commercial, I remember those feelings of misgiving, of anger that instead of greeting the birth of a child with joy, that friend and that woman at the store, thought three children (or five, or two, or one) was anything other than the amazing gift it is.

Why didn’t the father communicate with the boy, explain and perhaps compromised, “that snack is very bad for you, but come, we’ll pick out something else.”

Or, “we bought you a snack last week and we still have some at home. When we finish that, we’ll buy more.”

Or, “I’ll make you a deal – you help me get the rest of the groceries and if you are a very good boy, we’ll come back and get you a treat before we leave.”

So many potential responses, so many opportunities to educate the child – all lost with the ridiculous thought that he should have used condoms and avoided bringing this child into the world. And yes, that was the purpose of the add – pushing the use of condoms…but the deeper message is one which, if it defines Europe in any way, only succeeds in leaving a negative impression.

Second, I would never think watching a child throw a vicious temper tantrum like this one is funny and yet it was rated a top commercial in Europe. Why? What does that say about European society and the value it places on a child’s life?

No, it isn’t funny. Not for the father who is clearly embarrassed and doesn’t know how to relate to his own child; and not to the child who is clearly angry, upset, and feels the need to test the relationship. It isn’t funny for the other people in the store who clearly exhibit several emotions – embarrassment, even fear.

I can tell you how this scene would have played out in Israel. First, few people would stand by and allow the child to run around throwing things from the shelf to the floor and screaming.

A father who doesn’t know how to handle a child, would quickly find other mothers and fathers who would bend towards the child and ask what the problem is and offer other solutions. A dozen “grandparents” would move in to defuse the situation and the store manager would likely appear as well.

If a child falls in a playground in Israel, the mother often has to muscle her way through a crowd of other mothers who have run to pick the child up and soothe away his scrapes.

The old lady on the bus will offer advice about keeping a hat on a baby because of the wind; people will help a mother on and off a bus and she will take that assistance because it will never occur to her that anyone would run off with her child.

Life is so different here than in the US or in Europe. Here, every child is precious and is raised to know they are cherished. Each is a blessing. Always. Forever.

Condoms aren’t the answer here and while as a parent I can relate to the temper tantrum…for the life of me, I don’t see how this commercial was funny. The kid is suffering (and likely spoiled); but is that enough to have the father wonder if it would be better if child hadn’t been born?